The mystery of the Corner House...

My grandfather, John Kitchener Adams, served in the RAF between August 1940 and May 1946, including an overseas stint from 1944 in Belgium, France and Germany. Here's the chap himself: 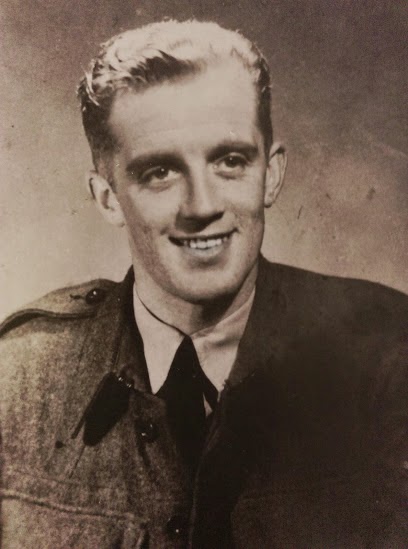 I have a stack of small, unlabelled photos of a coastal town from his belongings. One particularly intriguing photo caught my eye - a corner house, curtains tattered and blowing in the wind, with a man on a first floor balcony. A large piece of fabric - a flag, maybe - looks like it's being thrown down to the street. 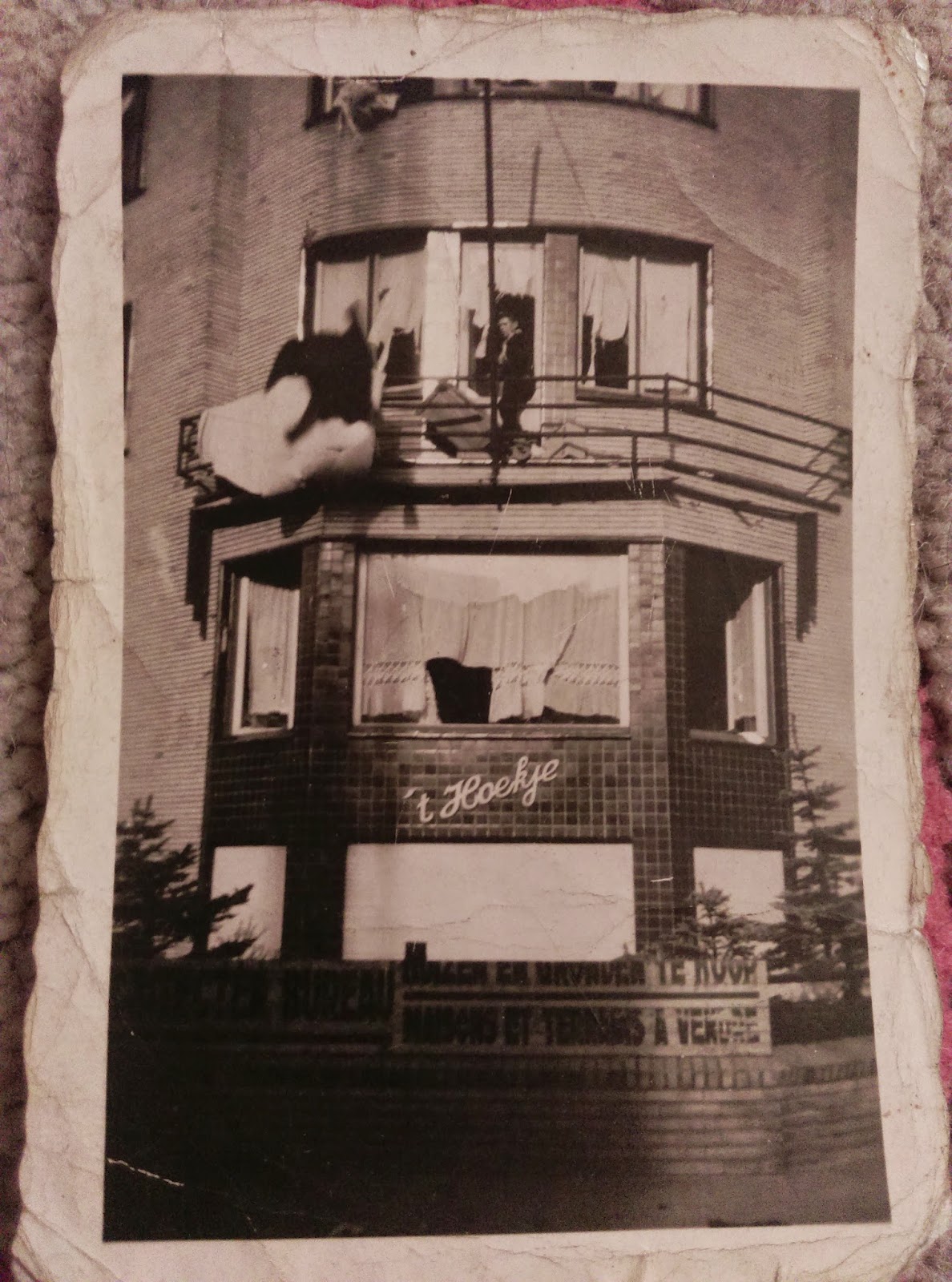 There are some markings on the building. The scrolled text below the window reads 't Hoekje', which means 'The Corner' or 'The Little Corner' - a popular name for homes (as well as bars, restaurants - anything on a corner) at the time.

There is also a banner across the railings in front of the building which reads 'Houses and Grounds/Land For Sale' in Dutch and French (a standard linguistic convention in Belgium).

I always found this photo intriguing. Something has happened to the building - it's in a bad way and whatever its fate was, it clearly interesting enough to be snapped by my grandfather or one of his companions.

I decided to ask the internet for help, specifically that depository of wisdom, knowledge and animated puppy gifs, Reddit.

Redditors quickly confirmed that this was indeed taken in Belgium, and soon the location was confirmed as the town of Blankenberge, a small seaside town just north of Bruges. Sure enough, pretty quickly, a Reddit user had trawled the main coastal area of the town using Google Street View and discovered that not only did the building still exist, it still had that original wrought iron 't Hoekje' sign! 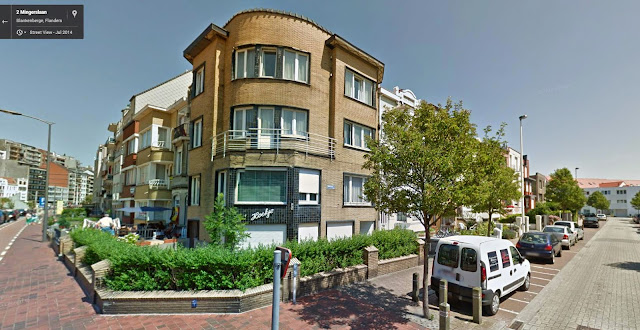 Amazing! The sign, the tiles, the balcony - all still there. Here's a Google Maps link.

And here's an aerial shot, with the corner house circled in red, showing how close it is to the seaside.

I was awestruck how quickly this little mystery was solved and how far people went to find out extra bits of interesting info - someone who actually lives opposite the house joined the discussion, telling me that the residence was taken over after the War by a family who have used it as a holiday home ever since.

I decided to email the local archivist in Blankenberge. He confirmed that the photo shows retaliation by locals against the wartime inhabitants of the house, who were committed members of the Flemish Nationalist Alliance (VNV), the right-wing Flemish nationalist movement during the War. Their aim was to separate the Flanders region from Belgium, and they collaborated with the Nazi parties and the persecution of Jews in Belgium.

By August 1945 the house had new owners - which suggests the photo was taken between liberation of Blankenberge on 9 September 1944 and the time the new owners moved in.

I'm trying to find out how common this kind of collaboration was in Belgium at the time - were the owners of this house unusual in their support of the party? Were many more people implicated - and so was the whole town ransacked like 'the corner' house? In the 1939 election, they garnered 15% of the Flemish vote and quickly worked alongside the Nazis after the invasion in 1940. The former fishing port is close to larger centres such as Bruges and Ostend, and not far from the French border - a key battle zone in the latter part of the War.

So how did my Grandad end up in Belgium, possibly even taking a photo of this house being emptied?

The (very helpful) town archivist sent me a scan of a town record book with correspondence between the town Officials and a Wing Commander Stewart Mackenzie of the RAF. I'd love to work out if my Grandad served under him.

In the correspondence, the Council profusely thank the Wing Commander and his team for their assistance in restoring the seaside town to its former glory:

'When on October 5th 1944 you came for the first time to Blankenberge we little knew or thought what a blessing this visit would mean for our town.
We had just passed through the glorious days of the liberation and were enjoying fully our beloved freedom for which we had been longing for many years.
Yet there was a shadow to this happy picture. What was our future to be? Our beach promenade, streets and buildings were blocked with mines, and bristling with booby traps, obstructions, barbed wire and so on - even the sea was perilous for fishing and bathing.
Would it be possible to remove all these dangers, repair the ruins, make the town safe and give us hopes of a summer season in 1945?
And if it were possible, who was the Magician to do it?
Those were the questions we were asking ourselves before your arrival. Then YOU came, and that was the answer.'


This shot from 1944 shows the state of the seafront - looking substantially more bombed out - presumably just after the liberation. By 1945, it looked like this - the prominence of the NAAFI building suggests the high density of troops stationed in the town. Here's a sign saying that, though the beach has been swept for mines, there's still a possibility of some being around. It seems clear that by the summer of 1945, the town was well on the way to recovery after German occupation, with a great deal of help from the Allied airmen.

It seems the RAF did sterling work in helping the town restore itself in time for the summer season of 1945:


'One of your first decisions was to provide us with the necessary transport to carry provisions and coal for the population, a gesture which won you the sympathy of us all. Then you began the demining of the promenade, squares and streets, harbour and beach, and whole blocks of houses, which enabled the evacuees to return to their homes.'

Not to mention cheering up the town after a hellish few years under Occupation:


'Not only have you taken care of our material interests, but you haveshown the deep kindness you feel for the little ones in organising for them numerous festivities, Christmas trees, children's paties and so on, which filled their little hearts with delight and gratitude for their 'English father'.'

The Wing Commander was awarded the Freedom of the City. In his reply to the Councillors, it's clear how close the airmen had grown to their temporary home (perhaps a little too close!)...


'Little did I realise on October 5th 1944, when I first arrived in your town that so much should have been accomplished. War was being fought at your doorstep and conditions in the town were bad..

From that day a friendship between the Town Officials and the Members of my Unit has been on a solid foundation. Your townspeople have been more than kind to Members of the Royal Air Force - even to the extent that you have in some instances allowed some of your fair ladies to be taken from you in matrimony.

I have another regret and that is we cannot stay with you for always. The day when we must leave Blankenberge is not far away and when that does come, we shall all be sorry. You may, however; rest assured that when we do leave, we shall carry away in our hearts, warm regard for all your great kindnesses.

Memories will be long and cherished and promises to return and see you again will be honourably fulfilled.'

It seems like this little Flemish town made quite an impression on the British men who went there to help restore it after a very difficult time - if my Grandad's work was appreciated quite as much as that of Wing Commander Mackenzie clearly was, I'm very proud. And it's incredible that, 70 years later, I can still find clues about my own family's history with a bit of online digging.


I have quite a few other photos from my Grandad's collection, including the one below, which the archivist confirmed wasn't Blankenberge. It's possible my Grandad traveled around a bit so this could be a different town, which, by now, probably looks very different. Maybe somebody out there can recognise it... 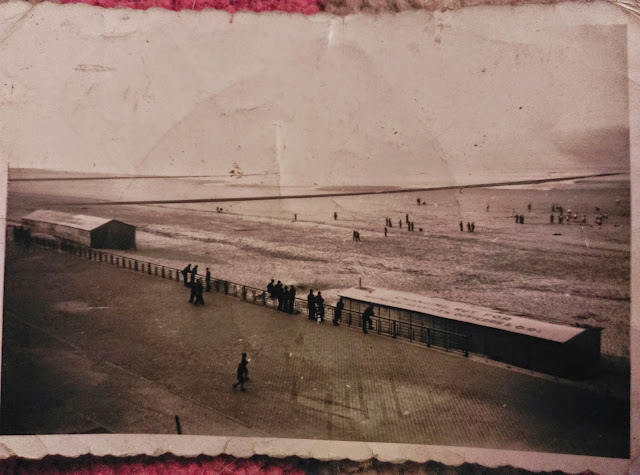